DAY 4 of the Booktour: an article for 'History Refreshed by Susan Higginbotham', 'The Supposed Daughters of an Earl'. To read the article click HERE.
Posted by Debra Bayani at 12:04:00 am No comments: Links to this post

DAY 3: Excerpt and Giveaway at The Anne Boleyn Files

For DAY 3 of the BOOKTOUR there is an excerpt to read and a copy of my book to win over at the excellent Anne Boleyn Files. Simply click HERE and make a comment at the end of the article for your chance to win.
GOOD LUCK!
Posted by Debra Bayani at 9:27:00 am No comments: Links to this post

DAY 2: Excerpt and Giveaway over at On the Tudor Trail

Day 2 of the Booktour: An excerpt and giveaway over at author Natalie Grueninger's brilliant website On the Tudor Trail.
To read the excerpt and enter the giveaway simply leave a comment before 9 September 2014 by clicking here
Posted by Debra Bayani at 11:19:00 am No comments: Links to this post

DAY 1: An article for the Henry Tudor Society

Day 1 of my booktour:

An article for the Henry Tudor Society 'The Extraordinary Bond Between an Uncle and his Nephew'.

It highlights the incredible relationship between Jasper Tudor and his nephew Henry, battling for survival for most of their lives.

Click HERE to read it.
Posted by Debra Bayani at 3:18:00 am No comments: Links to this post

Virual Booktour for 'Jasper Tudor, Godfather of the Tudor Dynasty'

Very excited to announce this week’s booktour for my book ‘Jasper Tudor, Godfather of the Tudor Dynasty’..
This is the complete schedule:

A crown fit for a Princess, Margaret of York's coronet

A recent visit to the Cathedral Treasury of Aachen has given me some additional information about a little object which has been in the possession of the Treasury for nearly 640 years. It is the coronet of a Duchess of Burgundy, Margaret of York, daughter of the Duke and Duchess of York, Richard Plantagenet and Cecily Neville and sister to the Kings Edward IV and Richard III. 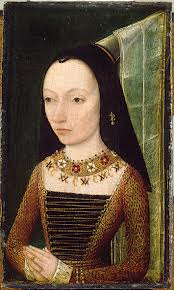 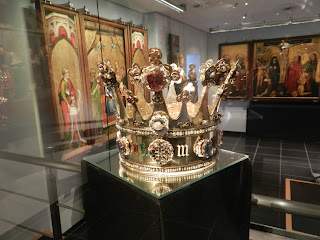 Margaret's coronet is said to be the only medieval British royal crown still surviving. This, however, is not true, there is another crown  worn by Blanche, daughter of Henry IV, at her marriage to Louis III, the Elector Palatine, in 1402, and still exists in Munich. Naturally this fact does not make Margaret’s crown any less valuable and interesting.
There is a possibility that Margaret wore her crown already in 1461 at the coronation of her brother Edward IV when she was 15 years of age and that it was adjusted for her in 1468 when she wore it at her wedding to Charles the Bold, Duke of Burgundy, on 3 July in Damme, near Bruges. It is very notable that this crown is incredibly small, with a diameter across the base of just under five inches, and a maximum height of just over five inches. The size does not make it any less splendid than it is. Between each rose appear letters covered with transparent green, white and red enamel forming the name Margarit(a) de (Y)o(r)k and the initials C and M adjoined with a knot appear  repeatedly. The white rose of York with a diamond wreath in the front, corresponds with the enamelled coat of arms bearing the arms of Burgundy,  France and England quarterly, which symbolises the marriage. Furthermore the circlet is made of gilded silver, ornamented with precious stones;  a diamond cross,  adorned with two edgings of pearls and surmounted by eight large fleurons; the one in the front is quadrifoliate (4 leaves)with a large ruby in a claw setting and mounted on a white rose, the other seven quinquifoliate (5 leaves) ornamented with pearls and sapphires. Below this is a small gold rose ornamented with emeralds. 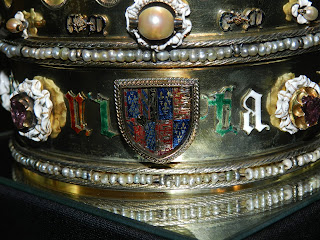 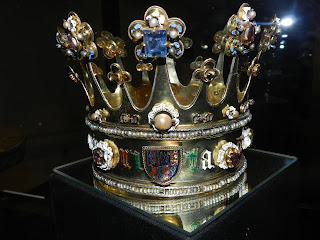 There is also a leather case for the coronet, the sides ornamented with a design of dragons and gothic foliage pressed into the leather. On top are the arms of Burgundy impaling England and France quarterly. The arms are surrounded by flints, the emblem of the Order of the Golden Fleece. Around the edge are again the initials C and M joined by knots, and, repeated five times, ‘Bien en Avienie’, ‘May good come of it’ the motto of Margaret of York. 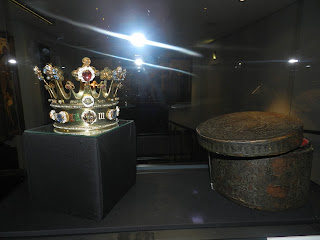 So how did Margaret's crown ended up in Aachen? It is known that Margaret travelled to Aachen on a few occasions and it is recorded that she spent some time here on 22 July 1474 and that either on this occasion or another, she donated her crown to the admired statue of the Virgin Mary of the cathedral. A child-sized crown was also constructed for the Christ Child. This, unfortunately, does not exist any longer. Up until now, the crown serves as jewellery during the procession with relics. 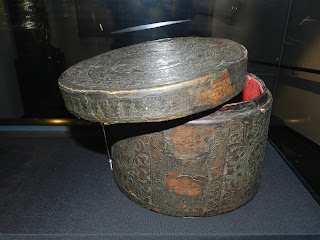 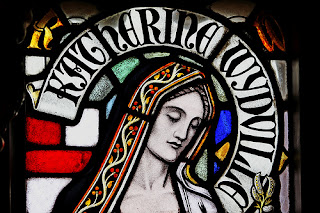 Today, 18 May, we commemorate the death of Katherine Woodville, who died on this day in 1497.
She was the wife of Henry Stafford, Duke of Buckingham, Jasper Tudor, Duke of Bedford and Earl of Pembroke and Sir Richard Wingfield and around 40 when she passed away. She was a sister to Queen Elizabeth Woodville and, out of, probably, 13 children, she was very likely the youngest daughter of Jacquetta of Luxembourg and Richard Woodville, 1st Earl Rivers. 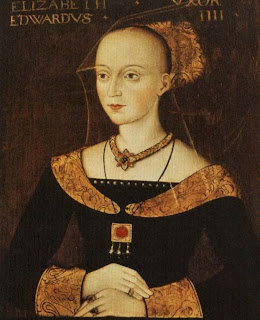 
Katherine married three times, first when still a child, somewhere in 1465, to Henry Stafford, Duke of Buckingham, with whom she had 4 children. The oldest, Edward, was born in 1478, who would succeed his father as Duke of Buckingham, followed by Elizabeth, Henry, Humphrey (who died young) and Anne. 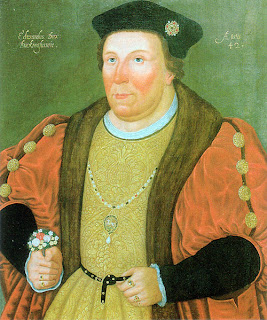 
Eventhough fruitfull, the marriage was, according to Dominic Mancini, an observer of English affairs during this time, claimed to be unhappy. Mancini declared that Henry Stafford “had his own reasons for detesting the queen’s kin; for, when he was younger, he had been forced to wed the queen’s sister, whom he scorned to wed on account of her humble origin.”
Katherine's life changed drastically in 1483 when, Buckingham being, along with Richard Duke of Gloucester, responsible for the death of Katherine's brother and nephew, Anthony Woodville and Richard Grey, changed side again when Gloucester had seized the crown as King Richard III and rebelled against the monarch he first had given all of his support. As a result Buckingham was executed on 2 November. Just-widowed Katherine found herself in a difficult situation, with four very young children. 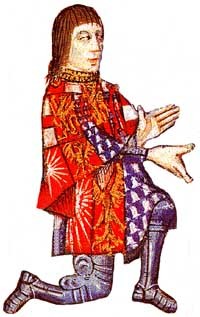 
But two years later, when Henry Tudor became King she was soon, on 7 November 1485, married to the King's uncle, Jasper Tudor, Duke of Bedford and Earl of Pembroke, who was aroung 20 years her senior. Together they would spend much of their ten years ahead of them together at their Manor at Thornbury. Jasper and Katherine's marriage was a one of strategic benefits and whether they were happy together is unknown.
It is rumoured that the couple had a still born son in 1490. 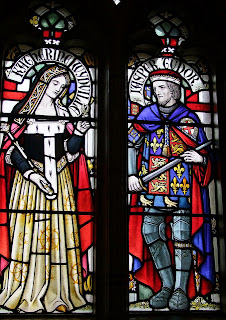 On 15 December Katherine's husband, Jasper Tudor made his will at their manor at Thornbury, mentioning his wife only briefly, nearly at the end of his will: ''I will that my lady my wife and all other persons have such dues as shall be thought to them appertaining by right law and conscience." Jasper died 6 days later, on 21 December 1495, being in his mid-60's.
Jasper's will and the fact that Katherine, who was now in her late 30's, very hastily remarried to a man, twelve years her junior, without a royal license, indicates a not very close relationship to her former husband and perhaps she even had an affair with young Wingfield before Jasper's death. King Henry VII fined the couple two thousand pounds for their presumption. Katherine would have probably known Richard Wingfield for some time; Wingfield’s mother was connected to Anthony Woodville’s second wife Mary and two of Richard’s brothers, and perhaps Richard himself, had served in Katherine’s household. Katherine's 3rd marriage wasn't, unlike her previous two marriages, of any strategic benefit for her and likely this final matrimony was one made for love.
Unfortunately for Katherine she was unable to enjoy her marriage for very long. Barely one year after, she died of unknown cause. Her burialplace is unknown. She did not have any surviving children from either Jasper Tudor or Richard Wingfield. Wingfield did remarry and had many children with his second wife Bridget Wiltshire. In his will in 1525 Wingfield requested masses to be said for Katherine’s soul.

Debra Bayani
Welcome to my blog! I am a researcher and writer, living in the Netherlands with my husband and children. I previously studied and worked in the fashion industry and studied Fashion History and History of Art. I am fascinated by all aspects of life in Mediëval Britain and the Middle Ages in general, especially the Wars of the Roses, and I have spend many years researching this period. Currently I am working on a guide to places connected to the Wars of the Roses. My debute non-fiction book, the first biography on the subject, 'Jasper Tudor, Godfather of the Tudor Dynasty', was published in 2014. My website can be found here www.thewarsoftherosescatalogue.com. Thank you for stopping by!